Bricco San Pietro is a large vineyard, classified as a Cru, located in the western part of Monforte d’Alba. Here has taken place the greatest productive fervor of the Langhe of the last years.

With almost 170 hectares of vineyard surface, Bricco San Pietro represents the second largest Cru in the village of Monforte d’Alba, preceded only by Bussia.
It develops along the west of Monforte, on an altitude ranging from 250 to 520 meters above the sea level (820-1706 feet).

In this emerging Cru, Monti winery leads the largest extension of vineyards, 7 hectares, located at an altitude of 380 meters above sea level (1247 feet), entirely planted with Nebbiolo for Barolo.

From the geological point of view, the soil of Bricco San Pietro, like Bussia, is mainly formed by the Marne of Sant’Agata Fossili of sandy type, a very ancient formation dating back to 10 million years ago and easily recognizable in the typical yellow-gray soil.
The Marne, characteristic of the Langhe, is a soft rock mainly composed of silt and clay and, in lower parts, of sand and calcium carbonate.

On the summit of the ridge of Bricco San Pietro, we find instead the Diano Sandstones. They consist of deposits from coastal areas formed 10 million years ago and therefore they are rich in fossil sediments.
Finally, to a lesser extent, in the easternmost part of the Cru, the Marne di Sant’Agata laminated rise.

This vineyard produces the following wines: 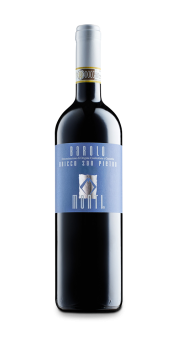